How do you spend a snow day?  When I was a child I longed for snow days.  No school, sleep in late, watch cartoons, read and bundle up for sledding and building snowmen and having snowball fights with the other kids in the neighborhood.  Snow days meant a day off from the regular routine and as a child I relished them, just like most every child, I suppose.

Now even though Sisters are all grown up, we still love snow days.  While our daily schedule does not change, where the Divine Office is concerned, the rest of the day is up for grabs.  With the exception of the kitchen, most work areas are slow and Sisters give themselves some time to enjoy the falling snow and by watching the birds who come to feed.  Other Sisters choose to spend some time working on a personal project, others read, and still others pretend to work but not much is seen for the effort!

But who can just stay inside and watch the snow fall?  Not me and not some of the other Sisters either.  So after dinner a group of us went outside to play.

It took us a few minutes to gather together as we maneuvered through the deep snow. Some of us did not come out fully prepared:  one had no coat on, one no boots or suitable shoes, and one no gloves.  The coat-less one lasted only a few moments, which did not surprise the rest of us.

But we finally gathered and it was glorious.  The wind was blowing, the snow was swirling all around us and we just stood there.

It didn’t take long for us to get moving because moving was better than standing. 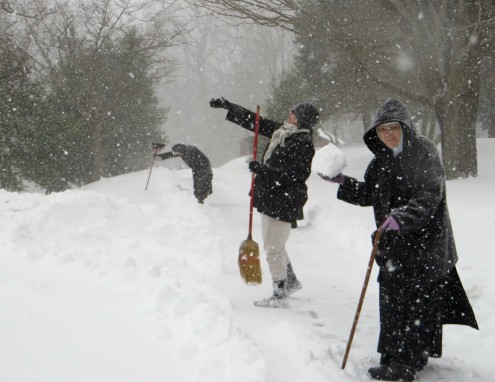 And then Sr. Hannah picked it up.  A big ball of snow.  And do you know what she did? 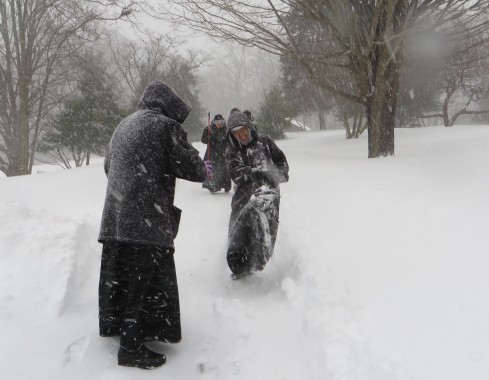 She lobbed it at Sr. Margaret and that was the beginning of little snowball fight.

Sr. Christina tried to make a snowball but wasn’t doing a real good job at it so you can imagine what happened. 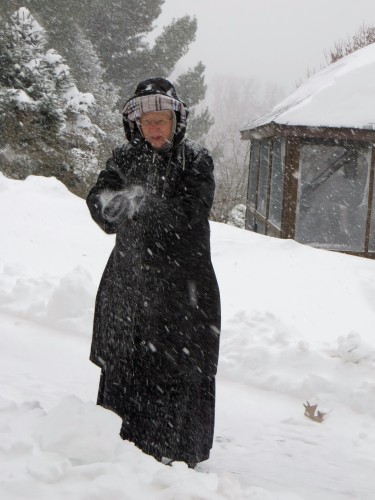 In the end, we had a great time just being outdoors and being together having some fun!

I mean, what’s a snow day for if you can’t have some fun?

No, not the song, though you may remember it:
“The Sound Of Silence” by Simon and Garfunkel
“Hello darkness, my old friend,
I’ve come to talk with you again,
Because a vision softly creeping,
Left its seeds while I was sleeping,
And the vision that was planted in my brain
Still remains
Within the sound of silence.” …and so forth….

This silence I speak of is before a big storm. Even if we did not have internet or TV it would be hard to mistake this storm stillness – in the natural setting of the Hilltop, at least. Not a pine needle is moving. Sisters have been scurrying around out side tucking away smallish loose items which might get blown to kingdom come…..the birds are busy in an intent sort of way. No squirrels in sight; they must be ready.

This will almost be a St. Agnes snow fall and we Sisters can look out on our roof tonight and say with Tennyson’s somewhat melancholy poem:

Deep on the convent-roof the snows
Are sparkling to the moon:
My breath to heaven like vapour goes;
May my soul follow soon!
The shadows of the convent-towers
Slant down the snowy sward,
Still creeping with the creeping hours
That lead me to my Lord:
Make Thou my spirit pure and clear
As are the frosty skies,
Or this first snowdrop of the year
That in my bosom lies. 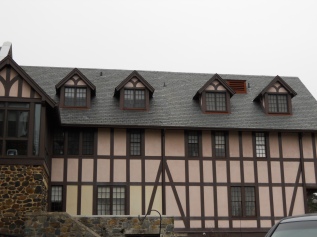 As you can see!

“God’s sign is the baby in need of help and in poverty.  Exactly the same sign has been given to us….God’s sign is simplicity….God’s sign is that he makes himself small for us.  This is how he reigns.  He does not come with power and outward splendor.  He comes as a baby – defenseless and in need of our help.  He does not want to overwhelm us with his strength.  He takes away our fears of his greatness.  He asks for our love: so he makes himself a child.  He wants nothing other from us than our love, through which we spontaneously learn to enter into his feelings, his thoughts, and his will – we learn to live with him and to practice with him that humility of renunciation that belongs to the very essence of love.  God made himself small so that we could understand him, welcome him, and love him….Christmas has become the Feast of gifts in imitation of God who has given himself to us.  Let us allow our hearts, our souls, and our mind to be touched by this fact!”